Was The Attack of the Green Smelly Aliens from Planet 27b/6 your first computer game or had you written / released games before this?

I began quite a few but 'Attack' was the only one that ever really got out there.

How long did the game take to make from start to finish?

A couple of months, I think, but working around college and other teenage commitments.

Was The Attack of the Green Smelly Aliens from Planet 27b/6 written solely for the Amiga Power competition (to try and win a job with Peter Molyneux’s games company Bullfrog) or was it a project you already had under development?

It was entirely created for the competition.

Note: Amiga Power ran a competition in issue two where the entrants had to write a new Space Invader's game with the winning prize being an opportunity to win a contract with Bullfrog and work with Peter Molyneux.  The image below is taken from the Amiga Magazine Rack website and shows how the Amiga Power team rated Alex's submission. 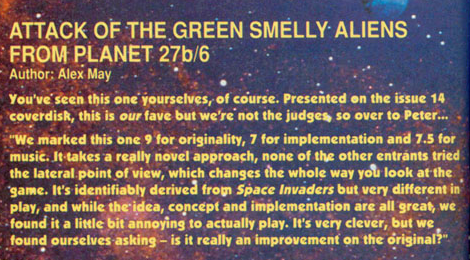 How did you come up with the name The Attack of the Green Smelly Aliens from Planet 27b/6?

It started out not wanting to call it "Space Invaders 2"... While designing the game I was thinking through why these aliens were attacking us, trying to get into their motivation (really). I was a massive fan of the Amiga game 'It Came From The Desert' by Cinemaware that used a lot of 1950's B-movie references and styling and I thought that might be a nice genre to take elements from so I had the title screen in mind with the big 3D letters effect and "Attack" felt like a good word for that - not to long or short and looked powerful.

The "Green" and "Aliens" parts speak for themselves if you know the original game, and the "Smelly" part was added more for verbal rhythm rather than any aspersion on the personal hygiene of the aliens themselves.

The "27b/6" was lifted from the Terry Gilliam film Brazil.  It is the name of a form that is required before any work can be done by the repairmen of the Department of Public Works.  I liked the idea of alien planet of bureaucracy.  Something about the repetitive, mindless sacrifice of the successive waves of aliens subjecting themselves to a deadly barrage of laser gunfire.

Gilliam's reference is to George Orwell who lived at 27B Canonbury Square, Apartment 6 while writing his novel Nineteen-Eighty-Four.

Not really harder but you're working in angles and distances (from the centre of the screen) rather than X and Y screen coordinates, so    its just a slight brain shift to think about everything in those terms.  All the positioning was done with pre-calculated arrays of sine/cosine values for speed.

The collision detection was done in hardware, which is the reason the graphics are so simple.  The aliens and ship are on one bit-plane, the bullets and shields on the other one.  This also meant I didn't have the benefit of any kind of anti-aliasing which is why the rotated graphics can look a bit rough around the edges.

The Attack of the Green Smelly Aliens from Planet 27b/6

Did you complete everything on The Attack of the Green Smelly Aliens from Planet 27b/6 including the music or were others involved with the project?

I did almost everything.  The graphics I created in Deluxe Paint, the music in some version of Soundtracker, and the code was straight 68000 assembler written with Devpac, although I used CygnusEd for editing the source.  The only part I didn't do was the Soundtracker playback routine which I found somewhere.

The music to your game seems to use lots of samples from films such as the Joker Laugh sample from Batman (1989) - can you remember where you got all your samples from?

Ah, well spotted!  I didn't sample a lot of them directly, but a few I can still recognise.  The opening organ sound might well have been lifted from 'It Came From The Desert', the long "Then expect something that's fiercer, more cruel and deadly than anything that    ever walked on earth." sample was from the 1955 movie Tarantula, the weird giggling sounds like it might be from the album 'You Are What You Is' by Frank Zappa (there's lots on the track 'Goblin Girl' but I think there was a cleaner sample later in the album), and the "here we go again" is almost certainly Public Enemy.

The four chord descending progression was based on the original    sound of the arcade game.  The music is called 'Strange is my name' but I have no recollection of why...

I was trying to stay very faithful to the original version so I didn't want to expand on it like that.  Some of the other entrants    to the competition really went to town with these ideas, though.  I wanted to add the bonus UFO ship in but wasn't sure where to put it.

What other Amiga games were you involved with - were there any unfinished projects?

I was far more involved with exploring the video production possibilities of the Amiga, including generating graphics by programming - which had a large cross-over with game programming techniques.  For my final A-Level art project - made roughly around the same time as this game - I created a five minute video that was a intense mix of 3D and 2D computer generated graphics I'd generated using various Amiga software techniques, video mixed with animated graphics, camera feedback, and the music was an Amiga and MIDI generated pounding disco version of Vivaldi's Winter.

Strangely, it wasn't received at all well by the examination board.

Ironically I continued to develop and expand upon the technology, techniques, and themes I found so exciting back then and am now an award winning digital video artist with an international exhibition profile.

On the updated version of The Attack of the Green Smelly Aliens from Planet 27b/6 for the PC you added the feature of bullets destroying the shileds - why was this feature left out of the original Amiga release?

Yes, finally!  I tried to do it on the Amiga, and spent some time trying different techniques but could never get it to work quite right, or at interactive speeds.  While the Amiga's custom chips were great at copying data around at great speed, doing accelerated graphical rotations was not possible.  OpenGL makes this easy, and as WebGL supports render to texture, it was relatively easy to finally implement the effect.  It adds a whole different feel to the game - you feel a lot less safe.

Although your game didn't win the Amiga Power design a shoot em game competition, did having your game included on one of their cover disks lead to any offers to work for software houses as a game designer or programmer?

There was only one job offer I was concerned with and that was the position at Bullfrog that was the prize for the competition.  I was doing my A-Levels when the competition was announced and I thought that working for them would be an amazing opportunity straight out of college and much more fun that doing a degree.

I duly wrote the game and submitted it on time but there was no mention of it in the next issue of Amiga Power, or the next, or the several after that.  Believing that I was definitely in with a chance I became increasingly perturbed.  I started to write to the editor of the magazine and even phoned them up a couple of times.  I think they sensed I wasn't going away so the next issue featured my game on the cover-disk and a promise that the following month the winner of the competition would finally be announced.

The next month the magazine came out and, heart in mouth, I turned to the results page and saw that I hadn't won, instead the equally stupidly named "Mr Wobbly Leg Versus The Invaders From Space" had instead.

My game had the highest score and the magazine also seemed surprised I hadn't won, but Peter Molyneux turned it down.

Evidently I'm still a little bitter about it...

If you could time travel back to just before you started work on the Amiga version of The Attack of the Green Smelly Aliens from Planet 27b/6 what things would you have done differently to the game before submitting it for the Amiga Power design a game competition?

a) learn more about hardware interrupts b) don't try to get the shields rotating with bullet holes in for another 20 years
c) instead, add sound effects rather than just playing the music all the time
d) call it "Space Invaders 2" or something else that doesn't look insane on your CV
e) don't trust Peter Molyneux

What has been the highlight of your involvement with the game industy so far?

It's been strangely gratifying finding web pages and videos and even an infinite lives trainer for this game that I wrote all that time ago.  It seems to have some relevance to people now, maybe just from a retro angle, which is fine, but I think the idea still entertains, even if it's basically a lateral variation of the original.

Are you still involved in the computer game industry and are there any projects you are currently working on which you would like to share with our readers?

I'm not involved with the gaming industry but I don't think I'd enjoy it much these days, really.  I liked the era of writing games where you felt they had tumbled out of the wildly imaginative brain of one or two individuals in a short space of time without much outside interference.  Something like 'Jet Set Willy' by Matthew Smith on the ZX Spectrum was an immensely playable game that contained so many lovely ideas and animations and regular 'what the hell is this guy on?' moments, you kind of felt that you were inside his world (for good or ill).  I guess I aspired to that with my game: it's very 'me'.

I think all these experiences have influenced my practise as a digital artist.  I still get to experiment with cutting edge graphics techniques - many of which come out of game development - and additionally combine them with hardware such as the Kinect, Arduino, video projectors, lasers and robots to present people with an aesthetic experience that sometimes have game-like elements - such as my interactive video works that feature simple abstract rules that are designed to be found by experimentation rather than explanation.

While not related to gaming per se, I'm currently showing work around the UK as part of a touring art exhibition dedicated to Alan Turing, celebrating 100 years since his birth, with a group of pioneering and contemporary digital artists who have been inspired by Turing in one way or another.

"The Attack of the Green Smelly Aliens from Planet 27b/6" can be downloaded from Alex May's website. 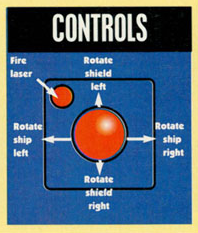 AmigaPd would like to thank Alex May for answering the questions and wish him all the best with his current projects.