Amigapd would like to thank Amy Worthington for taking time to answer some questions about her game Mr Bean Bag which after a long development period is now available for download in all its glory.  We would also like to thank Lifeschool from the Lemon Amiga forum for his continued support in providing us with some additional questions and research.

What or who are Glastonbridge?

Glastonbridge is technically Alex Shaw, my boyfriend and employer. It's a consultancy offering bespoke software solutions to anyone with an interesting project on offer. Alex's speciality is Android development, but we'll program anything that sounds like fun.

__How did you get involved in programing for the Amiga? Was this your first computer you programmed for?

__ The first computer I programmed for was the little-known Enterprise 128.  It had quite a good build-in BASIC for its day but you really had to code in Z80 asm to get the most out of it, sadly that was a bit above me at the time, so when my Dad came home with an Amiga A500 when they first came out I hoped it would give me more scope for creativity.

How did you learn programming, was it a hobby or did you study qualifications at school / university?

I'm entirely self-taught, with some guidance from my dad.  I decided not to take it up academically because I didn't want it to become boring, and I didn't want a career in it because I didn't want to end up writing PC applications software for accountancy firms.  It was something I did purely for the creativity of it, which my dad encouraged of course.  My mum, on the other hand, didn't really see the point in computers, she thought I should have focused more on my school work instead, and getting good grades.  I did go to university, and studied physics.  Ironically I now work in computer programming, and nobody seems to care much about my qualifications.     Mixing socially on the local tech scene seems to be the most fruitful way to go about it.

_ Was Mr Beanbag your only Amiga game or were you involved in other Amiga projects?

_ I wrote a few bits and bobs, mainly just testing out ideas and seeing what I could do.  Mr Beanbag is the only one worth mentioning really, being the culmination of so many of my previous experiments

__How many people were involved in Mr Beanbag over its creation life?

__ Really only just me and Alex (my partner).  He did most of the level design while I did the programming, graphics and music. 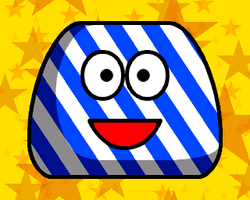 _The game has taken a long time to finish, what caused the delays and what motivated you to finish the game?

__Many things.  To start with, lack of motivation, lack of encouragement... when I produced the first working version of the game engine back in 1997 or so I was surprised at how little interest people showed in it, and I was studying at University at the time so I had other priorities.  By 2003 I'd polished the engine a little but I still only had two playable levels.  That was when I met Alex, and as an Amiga owner himself he thought it was great.  Fortunately by then I was unemployed, so we got quite a lot done over the next couple of years... but then I got a job and it took a back seat again.  But I've invested so much time in it now that I have vowed to finish it even if it finishes me.

_Was the game originally going to be a commerical release and if so did you have a publisher?

_ Originally I only wrote it for fun, and to see what I could achieve personally.  Back in 2005 (if I remember) a friend put me in touch with a guy who was setting up a retro-games company called Alten8 and he wanted to publish it, but we didn't complete on time so that fell through.  Now I'm happy just for people to play it.  People are telling me they would pay for it though.  I might produce a boxed version if there is enough interest.

_Which platform games influenced the game the most Sonic, Zool or Mario?

__ I tried to take the best from all three, but mostly Sonic.  After Sonic came out everyone was waiting for that "Sonic Beater" on the Amiga, and Zool was hyped as being it, but it fell somewhat short in my opinion.  I felt I could do better.  The original plan was even to have loops in it, but I dropped that. 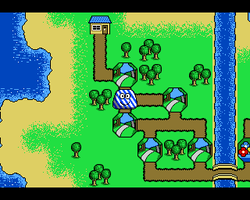 __ Why was the game AGA only? Were there ever any plans to make a version for the Amiga 500 or were there technical issues which meant it had to be AGA only?

_ By the time I started this project my old A500 had found its new home in the loft.  I had an A1200 by then so I wanted to see what I could do with it.  An OCS version is possible, although the parallax scrolling would have to go (rather that than reduce the graphics down to 7 colours)

__ What programming language and software tools did you use to create the game?

_I started out using AMOS, and I managed to get some quite impressive speed out of it just using custom copper lists.  It was more the flexibility than the speed I was having issues with, I wanted to be able to load code for each level on the fly, and also the compiled executables were rather large so I started porting it all to ASM.  I used HiSoft Devpac, DPaint, Protracker, my own homebrew map editor, and the bad guys are added to the levels from within the game engine itself (I took a hint from Sonic's god mode there.)

__What was the biggest programing challenge in making the game (e.g. scrolling routine, collision routine?)

_I think it was probably Alex.  No matter how much I optimised the code, he'd only go and design a level that slowed it down so I'd have to go and optimise it again!  I won't put up with anything less than 50fps.  The timing is pretty tight and there is a lot of action going on in the later levels.

__ The game was previewed in Retro Gamer magazine - how supportive have the computer press been towards the game?

__It also got a screenshot in the July 2006 edition of Edge.  It's nice to see your own work in something on the shelves of WH Smith.  I never had much contact from the press directly though. 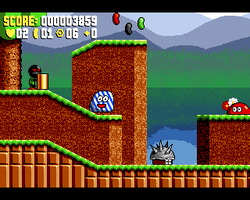 _Will there be further updates to the game?

_Yes, when I get the time.  I'm quite keen on keeping it up just now, but you never know with me.  There are a few important fixes in the pipeline (the final boss is literally invincible for now, I was surprised to find out that somebody actually got that far already!)  But I could go on tweaking it forever, there has to be a point where you say it's finished now even with its imperfections

_Why was a bean bag chosen as theme for the main character?

__ Because it was silly!  He's a character I conceived back in 1994 for my first experiment in smooth multi-directional scrolling, and he didn't really need to do much at that time but he kind of grew on me.  I was imagining quite a different game at that point that involved throwing cows, but the idea of anthropomorphising inanimate objects generally entertains me.  I drew a lot of silly friends for him, like Mr Fizzy Pop, who is a glass of lemonade with a face.  I'd imagined a game for him, as well.

_Are there any plans to add more animation to the main character?

_
_ I always get asked this.  The answer is no!  Call me stubborn if you like.  It does look strange when he goes down a slope balanced on one corner like that, I admit, but I just think it's funny.  I don't think the main character is really that important, and the more people bring the subject up the more I'm determined to make that statement.  It's the one thing I never liked about Sonic the Hedgehog - it's too much about Sonic.

_There was a Halloween level created as a holiday treat - are you tempted to do more specials like an Christmas level similar to "Fire and Ice"?

__ Indeed, this is the plan.  I intend to produce a special level for every month of the year, to be released all together as "Beanbag Seasons". 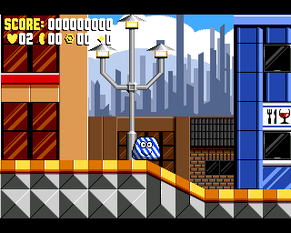 _Are there any hidden features for players to look for in the game?

__ There are secret rooms, and secret levels.

__Which part of the game are you most proud of?

__ The one thing that strikes me as the biggest achievement is how much I have managed to fit into it.  It really is a huge game, and it weighs in at less than 600k.

_Are there any plans for a level editor?

_What are your future plans - will there be any new Amiga games or are you working on different hardware?

_ Hopefully there will be a Mr Beanbag 2 - or Beanbag and Son as it will be known.  I've also started a conversion of Sonic the Hedgehog, which is long overdue in my opinion.  Glastonbridge might be investing in an XBox developer kit so we might see Mr Beanbag on the XBox yet.

AmigaPd would like to thank the Amy for taking the time to answer the questions and wish her all the best with her future projects.