How did you first become involvedin creating computer games and did you produce any games for the earlier 8 bit computers?

Gary Dunne (GD): I guess it's always just been a hobby, starting with the VIC-20 before moving through the Atari 800XL onto the Commodore 64 before getting an Amiga. I created a few C64 demos whilst learning 6502 assember, but nothing substantial, and certainly no games on the 8-bit. Back then distribution seemed much more difficult and the PD scene hadn't really taken off yet. It was when AMOS came along that I saw that things could be put together really quickly and with the PD getting stronger, it became easier to release your own stuff.

Did you have any unfinished or unreleased Amiga games?

GD: No, I wrote three games in total - Toobz, Infection and Confuzion (which was a remake of a game by Paul Shirley [Spindizzy] years earlier). At the time, I found myself out of work so had some free time, after which work sort of took over and I've ended up developing full time but not in the gaming world. All three of these were released at the same time.

How did you come up with the ideas for games Infection and Toobz and how long did they take to make?

GD: I saw a magazine article years before for Infection, but it never came to market, and I've no idea why as the principle of the game was perfect, although maybe back then the turn based approach just wasn't in vogue. So after Toobz was finished, I decided to have a crack at writing it. Turns out it only took a short while before it was up and running.

Toobz was originally intended have the balls dropped in from the top, and you had to adjust them on the way down. It quickly transpired this was pretty naff and the levels would be over very quickly, so I decided to put the launchers anywhere and it went from there. How long? A good few months, but that included the level editor.

Did you produce Infection and Toobz completely on your own or did you get other to help you with any aspect of the game creation?

GD:  I got a little help on the sound effects for Infection, but beyond that, it's all my own work. I not sure the concept works nowadays because you become very blinkered/biased as to what works in a game or not. You need more than one person, or at least a range of testers who can be critical and honest to bring the gameplay out.

Both Toobz and Infection were released as cover disk games on Amiga Power, do you remember how this came about?

GD: Confuzion was written in about 3 weeks after Toobz because it uses the same movement path code, so was pretty easy to write. I sent all three to a PD library (I think it was 17Bit) on one disk and they all seemed to get picked up by Amiga power at the same time.  I think they were included on issue 49 and the issue contained reviews of the games too.

Was the idea always to release Toobz and Infection as public domain or did you try to get them released as budget / shareware or licenceware titles?

GD: Absolutely, I never really saw it as a way to make a living, I don't think they quite cut the mustard. Back then, there just wasn't the scope for one man developers to make any serious money (although there were a few), but for me, the best part is in creating the game. 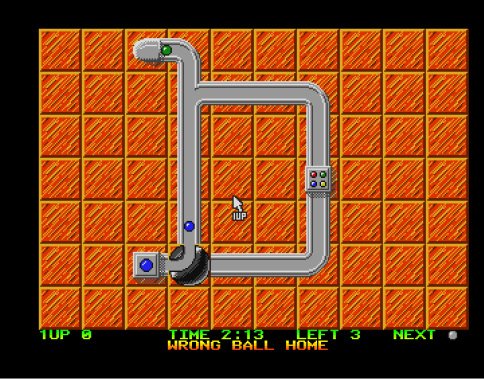 Which games did you enjoy playing most on the Amiga and were there any particular software houses or programming teams which inspired you or that you particularly admired their work?

Were you employed by Electronic Arts to work on Syndicate and if so what was it like working on this project?

GD:  No, I just did a week's experience at Bullfrog in Guildford play testing Syndicate and Populous 2 raising issues around gameplay, etc. They were beginning work on Theme Park at the time, but for me, it was a case of getting up at 5am to catch a train down to Guildford every day. Loved it - it was a really good environment, but it was just a week.

AmigaPd would like to thank Gary Dunne for taking the time to answer these questions.