How did you start programming and what was your first complete game project?

Ian West (IW): I started programming at school beginning on my Amiga.  It tended to be just basic programs and my first real game project would have been a maze game I wrote for my A Level computer project.

What games did you make for the Amiga and were there any unreleased projects?

There were no finished games that went unreleased, but I did quite a lot of work on an Ork Attack sequel and there were plans for a Santa and Rudolph Just Do It game.

The sequel to Ork Attack sounds interesting, how did the game differ from the original and how far did you get with making it, were there any playable stages?

IW: I was inspired to create the Ork Attack sequel by the ‘The Unoffical Ork Attack Fan Page’.   It was going to be PC based and written in the PC version of Blitz Basic.  I didn’t get very far with the sequel.  Jon produced initial graphics for the orks, knight and stages and I produced an initial prototype which was a single playable level.  Until recently I did have the graphics for it, but I suspect they are all gone now.

I am also aware of a PC remake of Ork Attack.  I am not sure if its still available but I found it  here

Do you still have all your amiga games and their source code?

IW: I no longer have the source or the original games.  The hard drive on my Amiga failed a few years ago which lost the original code, and a technical hitch on my home computer wiped the backup.  I know if I want to play them though I can easily find them on the Internet. (All four disk images are contained below)

Which of your Amiga games was your favourite and why?

IW: Santa and Rudolph is my favourite, although Ork Attack makes a close second.  It is such a great game and captures the fun and spirit of Christmas so well.  I did some magazine promotion for it as well, and there is a Santa and Rudolph Christmas card, see below.  Sadly no magazines used the game for their Christmas editions. 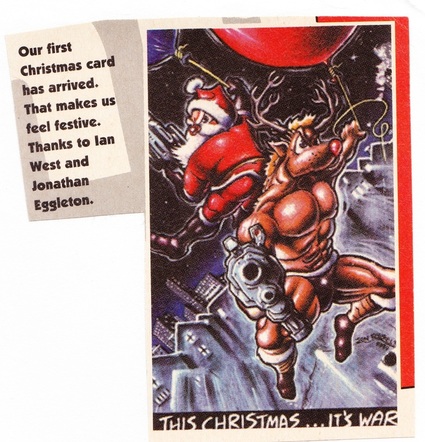 Which game proved the most difficult to make and why?

IW: They all had their different challenges.  I think Doctor Strange was the hardest mainly because we were working to a deadline and it was the first time I had used Blitz Basic 2.

Santa and Rudolph though nearly never got released due to an occasional freezing bug in AMOS.  I could never resolve that, and in the end I decided to release it even though it wasn’t perfect.  It was almost a year between the date I finished it and the time I released it.

Santa and Rudolph Do Christmas

How did you start working with Jonathan Eggelton and did he have complete freedom with the music and graphic style of the games or did you agree on a graphic style before starting the game?

IW: I met Jon at school, and we were best friends.  He is a natural artist and produced all the music and graphics with little input from myself.  I would take what he produced, put the game code around it and then we would see what we got.  The whole process was very organic.

Where did you get the inspiration from for your games and how much planning did you do before starting the coding?

IW:  Ork Attack was inspired by Ork Attack on the Spectrum/C64 (never sure which one).  Jon produced a version on his Atari ST in STOS, which I then recreated in AMOS on the Amiga.

Santa and Rudolph just seemed to happen.  The original concept was for a Lunar Lander clone, but I got all the physics wrong and we ended up with a JetPac type experience.  The graphics fitted and so we just carried on.

Were there any features / extra you wanted to include in your games but were unable to implement?

IW: None that I can think of.  The games just organically developed and at some point we just stopped and let them loose.

Did you try to get your games published as magazine cover disks or released as licenceware or as a budget title?

IW: All the games were released as PD, and when we first release Ork Attack there were no thoughts of cover disks.  Surprisingly, Ork Attack did make it on to the cover of one magazine and the first time I knew about it was the day I walked into WHSmith’s and it was on the shelf.

There were some hopes to get Santa and Rudolph as a cover disk, but this never happened.

I can’t remember which one it is, but Doctor Strange or Santa and Rudolph were featured as part of a magazine article.

If you were stranded on a desert island what three Amiga games would want to be able to play?

IW: That's a tough one as I liked so many games.  The ones that stick in my mind are Populous, Lemmings and Day of the Tentacle.

At Christmas do you dust off Santa and Rudolph do Xmas for some festive fun?

IW: Some years yes.  It still makes me smile to play it now.

Are you still in contact with Jonathan and are either of you still involved in the game industry today?

IW: I catch up with Jon occasionally.  We live at different sides of the country, but whenever we do meet we pick up where we last met.  I’m not in the games industry, but Jon worked for Sony Liverpool for a long time, and is now a member of one of the spin off software houses in Liverpool.

AmigaPd would like to thank Ian West for taking the time to answer these questions.