Amigapd would like to thank Jyrki Sinivaara and Jani Finér for for taking time to answer some questions about their Amiga game Damage which has been now been made available for free download.

We would also like to thank Lifeschool again from the Lemon Amiga forum for helping with research for this interview.

__How did the team (Jyrki Sinivaara (code), Jani Finér (music, graphics) and Olli-Pertti Kojo (graphics)) come together to start the Amiga project and were others involved over the creation period?

It was a lucky accident. We all come from a small Finnish town where almost everyone with similar interests seems to know each other. Olli had animated some ultraviolent stickman-animations on the Atari ST while Jyrki and Jani were designing a war game inspired by games like Wings of Fury, Dogs of War and Walker. When we all shared the initial design and saw the animations we came up with the base idea: there are so many war games where it’s ok to kill innocent people (which by the way, most of the players don’t even think about these days). We thought, "what if we bring that war to the streets and make it so violent and brutal" - no publisher would have the guts to release a game like that... and the rest is history.

How many of this original team are still involved with the planned PC update?

Mainly two of us, Jyrki and Jani. We’ve got some consulting from Olli though, so at some level, all of us are involved.

Damage -The Sadistic Butchering of Humanity 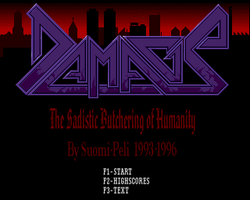 On the website you said that the project was over ambitious - which features took the longest to implement?

The whole city with its 150+ screens and thousands of the enemy waves were hand-made, but that was only the routine part. As it was our first game project, there were all kinds of feature creeps we wanted to implement every feature we came up with. As some wise man has said: “Your first project takes a life time and your second takes an eternity”. It took a total of 4 years to get our first game done.

Were there any planned features which didn't make it into the game? Did you consider adding missions or an in-game map?

Of course, and so many new features that came to mind long after the game was done, like the Silver Scythe. You’ll get that from Satan himself, to harvest the innocent souls. Also how the time of the day could affect what you can do in the game (which now sounds like a bad, restrictive idea, so luckily we weren’t able to do that). We thought about the missions for the sequel, then the GTA-series came out and we then thought missions can be too restrictive: we wanted to give the player total freedom to roam in the city and “create their own adventure”.

Was Damage the only Amiga game you were involved with or were there other unifinished projects?

We were involved in one unfinished project briefly before Damage. It was a Dungeon Master-clone. “But better”, *laughs*.

Is the PC version still being worked on and is there a planned released date?

Yes, but unfortunately not as actively as we had hoped. It’s nearly impossible to have a daytime job, a family and do your own games. New funding methods like Kickstarter sound very good for game projects like this, so lets hope something like this will be available in Finland too in the near future.

How will the PC version differ from the Amiga version?

It’s basically the same game but with better controls, easier drugs-system, different game modes (quick play / adventure) and other polish and enhancements that make the game more modern. People nowadays don’t have as much time to concentrate on games as back in the golden Amiga-era, so we don’t want to tease them: instant action is what they want.

What aspect of the game are you most proud off?

That we got it finished. Deep of our hearts, we are very proud of every pixel, idea, feature and nuance - from the DIE-shirt to the whole city.

What was the inspiration behind the style of the game, in particular the small sprites?

Olli’s stickman animations mostly, but also games like Wings of Fury, Walker, Dogs of War and of course it has been impossible to avoid the influence of Lemmings.

How were the sound effects created, did you sample them from other games or horror videos?

Believe or not, we created most of the sound effects by ourselves with a microphone and an Amiga. We swung towels to get the sound for the baseball bat and sampled the chainsaw sounds from a chainsaw Jyrki’s father owned. Death sounds are self-yelled too.

In the 1990s there was a lot of media concern about violent games like Mortal Combat on the Mega Drive which seem very tame by today's standard - did you receive any negative press about the game and are you increasing the horror levels for the updated PC version?

Damage was such an underground product that we didn’t receive negative press - as far as we know. Probably it was a good thing that the game wasn’t more popular back then. All the feedback and reviews were VERY positive. There was one letter though from a concerned british minister (or priest or something).

Damage - The Sadistic Butchering of Humanity 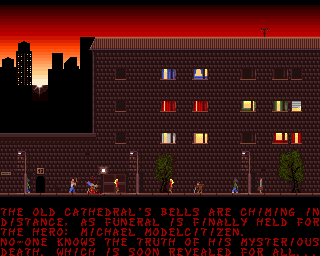 What was the response to the Amiga game like?  Did you sell many of the games?

Response was awesome. All the players loved the game and it still feels good to remember all the good feedback we got by mail and personally. The number of sold games was very low, just a few hundred copies, but as we’ve learned later on, the amount of actual sold copies may have been much higher: we weren’t the only young fellows back then who got swindled by more experienced business men. But that’s the way that the world goes around.

Your website also sells horror t-shirts - are their plans for specific Damage themed t-shirts - does the game still have a cult following?

Those T-shirts actually are Damage-themed. Our anti-hero wears the DIE-shirt in the game, as he wore in Amiga-version. There are some cult followers (greetings to Sweden!), but lets hope there will be plenty new followers when we’ll get a new version released

Yes. It’s only matter of time and money. Of course, on some platforms you can’t release “adult only” games. We've had some ideas to water Damage down a little for these platforms only. Perhaps we'll have to change the color of the blood to green and re-style the innocents as “robot-zombies” - we've not decided yet. By the way, if you have an idea on how to present the original game's comic drug addiction and necrophilia in a nice approved way, please do tell us.

AmigaPd would like to thank Jyrki Sinivaara and Jani Finér for taking the time to answer the questions and wish them all the best with his future projects.

To find out more about their current work please visit their website sadisticbutchering.com