How did Retroguru start?

Our initial first big game was a sequel (not remake!) of the alltime classic "The Great Giana Sisters" named "Giana's Return" and was published under "Giana's Return Team".  The follow up project was a remake of Sqrxz, followed by two unique independant parts. The creation team as a whole was credited as Sqrxz-Team, at least for the remake. Now the questions came up if we should seriously build the group name by "game name" followed by "team". I ran a couple of websites back then and one of these were "Retroguru", which was initially an automatic news accumulator for emulation related news. This page was mainly for my personal entertainment, but I made it public, as the one or other might had interest in this as well. While searching for a new group name, I thought that Retroguru might just hit the spot and is exactly what we are looking for. With the help of Simon Butler a guru style mascot was drawn, I did the font.

We had four modifications of our guru, which one of them has been decided by Rodolphe Boixel and myself to be the Retroguru. Rodolphe is the main coder of all our productions and not to forget the lovley people who help us bringing the games on different platforms. Followed by testers, artists and other helping hands. Please check retroguru.com for a complete team list!

How did the idea for the original Sqrxz game come about?

Marcus Vesterlund: I had just learn about ModeX programming in DOS, so I wrote some full screen scrolling scrolling routines. Then I thought I'd make a Jump'n Run out of it, and a friend named John Holmvall got involved. We found that we liked puzzles more than just Jump'n and Run - so we tried to incorporate tricky parts where you would have to think a bit before advancing in the level design.

Shahzad Sahaib: To add up to Marcus' answer; the original gameplay actually did not involve collecting all items in a level to open the level-end-door. This component was a modification on my side for our remake, which has new graphics and new music, to give this difficult game another evil twist.

Who designed the main character for the game and were there any alternative characters considered?

Simon Butler: I was the artist on the Sqrxz remake. I redesigned the main character as well as all the background and tile graphics. The character design was driven predominantly by the limitations on size and the animations I wished to put in the few frames that I was allowed. The shape of the characters head has actually caused some confusion. To my eyes he is a strange alien whose head goes to a soft point at the back (see picture below). Jane, the artist who did the title page turned him into something resembling Jazz Jackrabbit. This was the first image that came to mind, I never considered any other type of creature and my little alien is now seen as being something like Bugs Bunny. 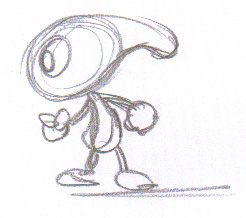 Simon's original sketch
Shahzad Sahaib: Actually there was some confusion as Simon already told. As I only had the sprite sheet and not his concept drawings, but we required Sqrxz drawn for the second part, Jane only had the spritesheet to draw a full character. Never the less we all learned that communication could be improved. The outcome of everything is still pretty neat! Although Simon is still unhappy about the situation, I think.

Jane Mumford: I had the pixelgraphic design of the character in front of me, but since it was 16x16 pixels I had a lot of freedom in the actual end-design. I thought it should just be simple and to-the-point, a rabbit with an attitude.

Shahzad Sahaib: And so Simon's alien became what Sqrxz is now - a rabbit with red boxing gloves.

Is there any significance in the name Sqrxz?

Marcus Vesterlund: It uses all the cool letters in the alphabet, and its the sound of a bug getting crushed.

Marcus Vesterlund: Giana Sisters on the C64! Sqrxz was originally called Galliano Brothers, but that was quickly dropped as the game started to take shape.

For which computer hardware was Sqrxz made for originally?

Marcus Vesterlund: It was written on a 468 DX25 in DOS using Turbo Pascal and inline Assembly. It required a VGA graphics card for the 320x200 original resolution. A 160x100 resolution was added to make the game run smoothly on 368 hardware as well.

How long did it take to convert the game to the Amiga 500 and what was the motivation behind making the conversion?

Frank Wille: The Amiga port took a little more than three months until it reached the state which was presented at the Demodays in Switzerland (V1.0). We are still doing some minor bug fixes and improvements and will release V1.2 soon. The latest release will be HD-installable and also comes as an ISO image for CDTV and CD32.

It could be done in such a relatively short time, because graphics, music and sound already existed and just had to be converted into a format suitable for the Amiga hardware. Also the game engine itself already existed as a C source, which "only" had to be rewritten in 68000 assembler.

On what hardware was the music for the game created and what software was used?

Brendan Ratliff: The music was created using Protracker 3.15 on an Amiga 600 and an Amiga 1200, and with MilkyTracker for Windows/OS X. Most of the tiny looping chip-style samples were either made manually by editing ASCII files and loading them as raw audio data (an oldschool trick!), or - particularly in the case of drum samples - taken from very old Amiga sample disks that were swapped in the public domain in the late '80s and early '90s.

Alexander Wiklund: The softwares used during the conversion was Protracker and MilkyTracker. Shahzad sent over few .XM files so I could start arranging and converting to .MOD. I basiclly worked with MilkyTracker to get a workflow and used the limitations of .MOD, which then were polished in Protracker.

Shahazd Sahaib: Brendan's music for the first part was not exclusive for the game, but taken from previous music releases. Some of them were extended modules (.xm) but for the OCS port we required all of the music being regular Protracker modules. 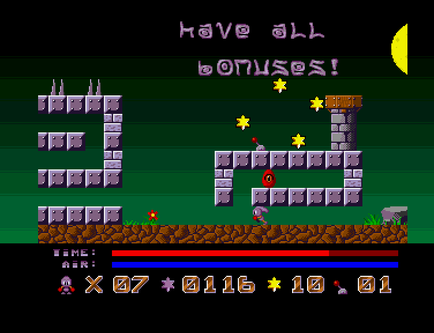 Are there plans to convert Sqrxz 2 and 3 to the original Amiga 500 hardware?

Frank Wille: Large parts of the code can be reused for these sequels, so we already thought about this possibility. In fact, Sqrxz 2 is nearly finished. And Sqrxz 3 might be ported next year. But at the moment we can only promise that Sqrxz 2 will be released before Christmas.

How many people were involved in the Sqrxz conversion for the Amiga?

Shahzad Sahaib: Talking about the Amiga version only there were basically only four people actively involved, as most material was already present. The real team size is a lot bigger. Frank did the Assembler code. I helped in various organizing aspects, beta-testing and led the team. Alexander rearranged few of Brendan's .xm's to be Protracker compatible .mod's and last but not least Simon has put hands on his graphics again to comply with the 32 colour limit.

How have the gaming press and online community responded to Sqrxz?

Shahzad Sahaib: As a marketing gag Frank and I made the game firstly available on floppy disk only. Even at the release event we just hand out floppy disks. Furthermore a couple of print magazines and Amiga pages were contacted with a classic letter along with a floppy disk containing the game. The main goal of this was to give people a reason to get their old Amiga's out of the dustbin – in some cases we succeeded, in some we didn't. There was mostly positive feedback, but we were also ignored by important relevant places. In general the news spread slow, but they spread. We still love to get feedback, so if you read this lines and have played our game(s), go ahead and write us :) 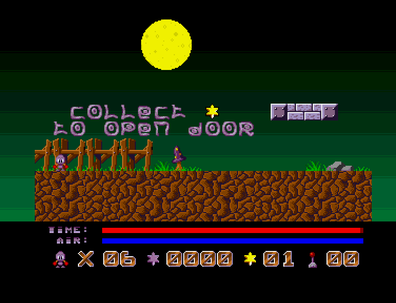 What are the main limitations of creating games on the Amiga?

Frank Wille: It is certainly the 7 MHz CPU and the limited amount of memory. We try to fit our Amiga ports into 1 MB RAM. Fortunately the Amiga has strong coprocessors, like the Blitter and the Copper, which can mostly work in parallel to the CPU.

In our Sqrxz1 port we had the biggest problems with the size of the music modules. In the end we had to replace some of them with different, smaller mods, to fit them all into the memory.

By effectively using all hardware features this port shows that there is nearly no difference to the original C- and SDL-library based version on modern machines with hundreds of times the CPU power of an A500.

Are the Sqrxz games created on real retro hardward or do the team use modern PCs and emulators?

Frank Wille: The AmigaOCS sources of Sqrxz are completely portable and can be developed and built on any operating system. For that purpose I was using the portable vasm assembler and vlink linker together with some tools written in portable C, to convert the original data into Amiga format. I mostly worked on a Pegasos2 running MorphOS and a PowerBook running NetBSD. The game was constantly tested on my A3000, A500 and Minimig, and had been debugged using UAE.

AmigaPd would like to thank all the folk from Retroguru for answering the questions and their continued efforts in releasing games on the Amiga.  Long may it continue!!!!