Where did the name DawnBringer come from?

Dawnbringer - Richard Fhager (RF): Think I was browsing  a computer magazine in a store one day, and saw a nice piece of user-art with a dawn/sunset theme (not sure if it was a C64 or Amiga500 picture)...the word "DawnBringer" popped into my head, and I've used it ever since!

How did you start programming?

RF: Like everyone else, I was introduced to the C64 and learned to write 10 PRINT "[Name] Rules!"... :D  Then I occupied a friend's C64 and started writing small silly Basic-programs: A few years later (the Amiga500 was already on the market) I bought a used but well equipped C64 and spent a year exploring how to push C64-Basic to the limit (with help of the Final Cartridge III  that allowed me to move memory areas around).

Which Programming Language did you mainly use to code your games?

RF: AMOS, with a bunch of "Extentions" that improved many old commands and added many new ones. Never used any other language on the Amiga for gamedev.

Was Crave your first completed game and if you could had the opportunity to release an update what changes would you make?

RF: Yeah. Since I'm a much better pixelartist today the graphics would get some  serious love. And it could be a fun challenge to write a good A.I. for the opponent tank. 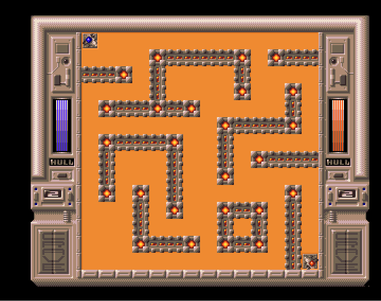 How did you come up with the name BabeAnoid?

RF: Hm, I wanna remember the name was assigned early, so it could have been one of those silly spur of the moment ideas. Although I already had the drawings of the girls and thought they could squeezed into the game
somehow. Then the concept was developed that the player had lost an army of cybernetic women which he had to breakout. In the early stages there were actually small entrapped balls that would trail the main ball after being released! So that gave the title "BabeAnoid" (Babes & Arkanoid) some solid meaning. This "prison" idea was later ditched, but the name and the girls remained! :)

How did you decide on which photos to include in BabeAnoid as background images and are there any amusing stories related to them?

RF: BA was all "use what I have, coz there isn't enough & energy time to make all new material"! So any picture that could work as 4 color background was fair game, and the people in the pictures are friends, many of which helped out with beta-testing from time to time - a good way to keep them happy! And pictures of myself wouldn't run into any "legal" issues, so it was easy to add more of those :/

It seems from the credits that you were responsible for every aspect of BabeAnoid, which area of development (coding, sound effects, music, play testing) was the most frustrating to complete?

RF: Hm...Leveldesign maybe. Never liked that. It was also rushed a bit, as the game needed to be finished in time for a convention. With so many features in the game, it was hard to make them all justice and find a good balance and distribution. There are advanced features that only appear on a single level.

How did you create the ball physics for BabeAnoid and did you ever consider adopting the Arkanoid method where rear deflections are possible?

RF: I know it's confusing to a lot of people, but BA uses "real" physics; a moving bat will affect the ball - in both angle and speed. The Arkanoid method didn't appeal that much to me. However, I did consider adding physically correct reflections to the rounded edges...but guess that proved too complicated, esp. with all the different bats available.

How did you design the different levels and are there any levels which cannot be completed within the time bonus?

RF: Technically the levels are images built by colorcoded miniature tiles...so they would actually be pixelled by hand in Brilliance! Later there was a leveleditor designed to speed things up.

Yeah, there are levels where it's probably close to impossible to finish quickly (like the multihit blocks). There's equipment that can aid almost any situation and the game is giving some advice on the rooms you are about to play. Come prepared! Still there's a problem with levels that can drag on for a long time, that's why I added features like the Buzz-saw bonus that will kill a random block, and the "Ball-Kicker"-probe (HELP-key) that will give the ball a push if it's stuck somehow.

With falling money, lazers, hysteria-mode, and starfields scrolling in the background etc, what was the hardest graphic or game design element to implement?

RF: Nothing was really that hard as an intial or individual design. The objective was to work with the Amiga and AMOS, not against them - looking for any feature or effect that could be utilized. But the trickiest thing might have been the block-shadows (falling on the background image) that need to be updated properly and FAST. With many bobs (blitterobjects) on screen, tiles being destroyed & created and all the background screen-copying, all in the same area, it was quite hard to avoid graphical errors. As more elements came into play in ever more complex combinations, figuring out and tracking down some of the many odd bugs could be also be quite tricky. The soundsystem took some planning but it turned out very well; all in-game music are using just 2 reserved channels and the other 2 channels are used for SFX. The soundeffects all have priorities assigned to them and the system makes sure that important sounds can't be interrupted by lesser ones.

How did you maintain the incredible smoothness and speed with so much going on?

RF: Haha, yeah that's a mystery...for years I kept thinking "It's gonna break now... can't possibly add another thing". The first barrier hit was the AMOS internal compilation limit; the mainloop couldn't be more than 30K (?) without forcing the compiler into a different mode that would make the program slower. So that's where I learned the value of Procedures (functions) that could place any amount of code outside the loop. Then it was much about scheduling; distribution of heavy tasks over time (frames) and never update anything that doesn't have to be
updated. Keeping the graphics small and resusing the same hardware sprites for different effects etc. I love finding smart optimizations.

Where did the idea come from to have a pinball elements, like the ramps and the random bonus multiplier if the player collected all the BONUS letters?

RF: Don't remember all the specifics, I just kept thinking of new effects and features. After a new concept had been implemented it didn't take long until I was bored and wanted something new!

The BONUS game however was supposed to be a real subgame and not just a lottery; actually there was a 3D-labyrinth game (ball avoiding holes) in the works for that part...but it was just too much of a clash in
playingstyle. There was probably other candidates for that game as well, but in the end I just had to save time & effort and settled with the simple lottery. Sorry! :D

(screengrab of that Labyrinth-game shown below)

Were there any features which you wanted to include in BabeAnoid but didn't?

RF: Oh, it would have been nice if the Laser could also destroy blocks...but it was just too slow (tricky blockshadows remember?). On the drawingboard there was also the idea of giving the ball a "flail-tail" (spikeball on a chain) that could destroy blocks itself - that could have been cool. Then there was this idea about worms crawling on the blocks...can't remember what happened to it...maybe it was just dropped after the introduction of the Lemmings, which are somewhat similar.

BabeAnoid is still fondly remembered by the Amiga community and was recently included as one of the games for an on-going competition between two rival Amiga forum communities (Lemon and EAB) – are you surprised the game is still played today and did you ever imagine it would be used in a gaming competition?

RF: It's nice to hear that the Amiga legacy is alive and that there's still people playing BA today...it is a fun game to this day (even if some levels are a bit meh ;)). But a gaming competition? No, I wouldn't have expected that...it's a bit long and crazy for that purpose one would think, haha!

What are the most obvious changes/updates in BabAnoid v2.5b1 over the v2.0 release on Aminet?

RF: Ah, so you've sniffed that one out :D

One big diff is speed, thanx to higher detection resolution the ball can now move faster...and hitting it with a moving bat has more effect - it's a brand new game!

More (not very hidden) levels showcasing completely new concepts; Colored balls and walls (walls can only be destroyed be a ball with the same color), A.I. blocks that can avoid the ball! and SpinWheels that will catch the ball and eject them in one of 7 directions...make sure you find the level full of them, it's crazy fun to watch! And much
more...check out this page for a full list:

(Also included some screengrabs from 2.5)

Will there ever be a BabeAnoid V3?

RF: I might one day create another Breakout-game, then hopefully with some crazy features in the spirit of BA. But it would never be anything of the same complexity...

AmigaPd would like to thank Richard Fhager for taking the time to answer these questions.