The aim of the game is to reach the Dragon. All 50 levels must be completed  to do this. In every Level there is Wizzy, his Master and one door It is your task to bring the master to the door without running into  one of the many, many monsters that you will meet.  To achieve this you can make stone blocks appear and also disapear, you may also use some of the many objects available.

The joystick functions are:

You may therefore only build blocks Left, Right or Diagonally and not directly Upwards or Downwards. When building a block the fire button should be pressed before the direction is selected. understood?, no?, doesn't matter, try it out and you'll see.

The many objects such as: Keys, Locks, Diamonds,   Lightening rods, Guards, Rainbow doors, Rainbow bridges, Shields, One way streets etc. are there for you to try out! The first five levels are very easy and serve really just to warm the player up. From level 30 you are in the difficult stages, levels 40-45
are extremly hard, after that its easier again. After every five levels or so a Scroll will appear with a Level Password, this is so that you don't
have to start from scratch every time you boot the game.

With this Password you can open a secret door and enter the game at the level for which you found the Password last.

Some keys during the game have functions:
Pressing <HELP> brings up a help page.#
<P> Pauses the game.
<S> speeds up the game, for some reason that I don't understand it runs at different speeds depending on the amount of memory in the system being
used.
<ESC> ends the level if you get into a position from which there is no way out, this costs a life!.

When all three lives are gone you may enter your name in the high score list that is, if you've scored enough.  The high score will only be saved if:
the disk is NOT write protected and then only if you exit using the ADIOS AMIGAS option from the menu.

Special Note: It really is worth playing to the end,

The procedure SHOWDOWN is the longest procedure of the game, it is a couple of hundred lines of code which was frustrating to write especially when you think that most people wont get to see it!.

This game was developed from may-aug 1990 on an Amiga 1000 with 2.5 MByte of memory. It had to run on every Amiga with 512K and be compatable
with Kickstart 1.2 and 1.3, it was written in GFABASIC 3.03 and was compiled with GFA-Compiler1. The pictures were done with DPAINT III. The sprites and
Levels were done on my own Object-editor. Sounds were produced with Perfectsound Software and the CADE-Digitizer, Music with MED2.00e von Teijo
Kinnunen who finnished it on 12·8·1990.

The game was written by Guido & Sören Appenzeller. It may be freely copied on condition that no part of it, text picture or sound, shall be altered, and all program parts shall remain in tact.

All who feel morally bound can send a donation to the address below. The same goes to all those who wish to know how to enter the level-editor
or those who have questions or critics. 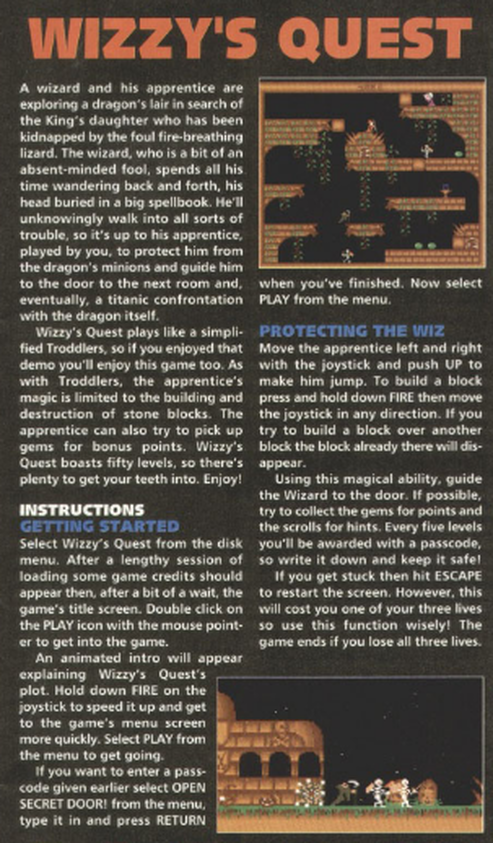