Thanks to Mike Boeh for responding to our interview request so quickly.  For those of you who do not know his work, Mike was responsible for Artillerus II and Charr and is still involved with creating games on different formats today. Below is his interview with us.

What did you think of the other amiga artillery games scorched tanks (Michael Welch) and Tanx (Gary Roberts) - did they influence your games at all?

Artillerus was out before Scorched Tanks, so that wasn't an influence- but I liked Tanx a lot, but felt like it needed more weapons.

What games influenced you when designing Charr and Artillerus 2?

Scorched Earth on the PC mostly, but I wanted scrolling like Tanx had.

What programming language did you use to make Charr and Artillerus 2?

Both were made with Blitz Basic 2.

Were there any funny stories you can remember from your Amiga development days you are willing to share with us?

Well, after I released Artillerus, I got a snail mail letter from Mike Welch, the author of Scorched Tanks.  We became friends, and shared a lot of development stuff.  Eventually I got a job at a commercial PC game company, and we hired Mike too, so we worked in cubicles next to each other for a few years.  We're still friends and both independent game developers today.

Where there any unfinished or unpublished amiga games you worked on?

Not that I remember...  After Artillerus 2, I graduated from college and got a "real job", although Charr was done in my spare time after that.  I also made a game over the weekend called "Turbo Hockey". 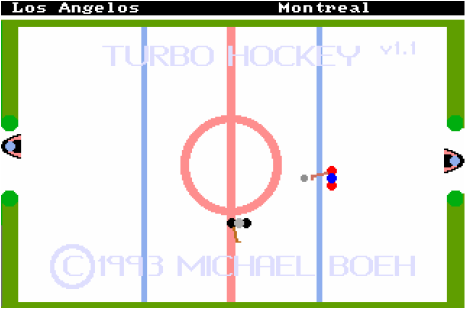 What aspect of the programming caused the most problems?

Honestly I don't remember having too many issues.  I seem to remember having some problems with copper effects in Blitz and actually faxing code to Simon Armstrong.  That's about it.

The last version of Artillerus worked on most / all amiga model - how difficult was it to achieve this?

.It was pretty easy because of my job at an Amiga dealer- I had lots of Amigas to test on

How did you play test the game - did you have many 8 human player sessions ?

The only way I could test with 8 human players was to play as all 8 myself.  I worked at an Amiga dealer during college, and the coworkers there helped me test a lot too.

Which features of Artillerus 2 are you most proud of?

I guess the backgrounds, since I had to really try to get the number of colors down.

On reflection were there any weapons which you think made the game unfair?

Between Artillerus, Charr, and Warheads on the PC, all the weapons kind of blend together :)  I know I would come home from partying in college and work on Artillerus weapons while I was still affected by the drinking...  I know that's when I did the acid snow weapon.

Do you have any tips in terms of tactics / weapon choice that players should follow to be successful in Artillerus 2.

I'm sure anyone playing it is a lot better than me- I wasn't very good at it.

Was the intention always to make Charr and Artillerus 2 shareware or did you try to obtain a budget commercial release?

They were shareware (Charr was freeware) from the start.

Is the full version of Artillerus 2 still shareware or have you now released it as freeware?

I would love to, but I can't seem to find the source code.  If anyone has it, I have no problems with it being PD.

What projects have you got planned for the future?

I worked for the last 4 years at PopCap, and when I left, they gave me a game I worked on while I was there- which was great of them to do.  I am finishing that game and it will be available on a bunch of different platforms.  It's almost ready.

Do you still look back at the amiga commerical / shareware games for inspiration when designing your new games for Retro64?

Thank you for answering our questions.

My pleasure!  I love thinking back about those games and that time!

Charr - This game can be found on Assassins Disk 245

Turbo Hockey - This game can be found on Assassins Disk 169

We hope you enjoyed reading the interview - remember AmigaPd is charity ware - please visit our just giving page to support our chosen charity Mencap.
Powered by