The Experiment - GAME OF THE MONTH 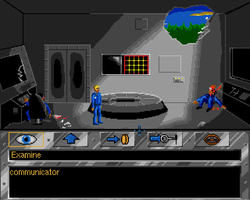 Van Merak IV, 3070 AD, A United Planets research base on the planet was destroyed by the evil Stingon Empire using planetary bombardment.  However, not all of the base was destroyed - one outer post remains, and with it its surving personnel.  What do the Stingons want with a peaceful research base? What is the sinister truth behind the Experiment?  One man would not give up hope.  He would fight to the end.  His name was Bud Lighting, and this is his story ... So begins the story behind the GRAC demo version of the Experiment.

For those of you who have not heard of GRAC before, I will quickly update you.  GRAC stands for Graphic Adventure Creator and was a licenceware program created by Edmund Clay and enabled users to create their own graphic adventures similar to those popular on the Amiga at the time such as Monkey Island.  The Experiment was created by Edmund's younger brother John Clay created the Experiment with his friends Ant Dzeryn and Mark.

The game is the stand point and click adventure that requires you to select a graphic icon to perform actions.  The actions available are; Talk to,take, Operate, Use and Talk to.  You select the actions with the left mouse button and use the right mouse button to execute.  The first problem you have to solve is how to escape the room which has been hit by the bombardment.  This shouldn't take to long to solve as there is only a rock which can be picked up in this room and very few items to use it on.

Once you escape the room, the adventure begins.  You will progress through the game in the usual manner by talking to non playing characters, picking up items and using those items to solve puzzles.  The attraction of these games lay in their presentation, interface and story.  The GRAC system provides an easy system to use and keeps the actions simple without presenting lots of actions which are only used occassionally.  The graphics, whilst not of the standard of Lucas Arts games are still very professional and succeed in creating a believable world which the player wants to explore.  There is a gentle humour in some of the verbal exchanges, similar to the put downs in Monkey Island your character is able to use a humourous put down to the characters he meets and has no qualms with telling the second person alive after the explosion that they are "as much use as a surfboard on Olympus Mons".

In conclusion, if you love point and click games then you will enjoy this.  If you don't like point and click games then you will probably not enjoy the game as the genre can be slow, requires the user to read the verbal exchanges and the problems do involve some thought rather than relying on shooting everything that moves.  If you are a big fan of Point of Click adventures then you will probably enjoy visiting Burns Flipper Games Emporium website which contains lots of graphic adventure games to download and play aswell as a good interview with Edmund Clay the creator of GRAC.

I hope you enjoyed this months review page - if you did please support our chosen charity Mencap by visiting our Just Giving Page.
Powered by